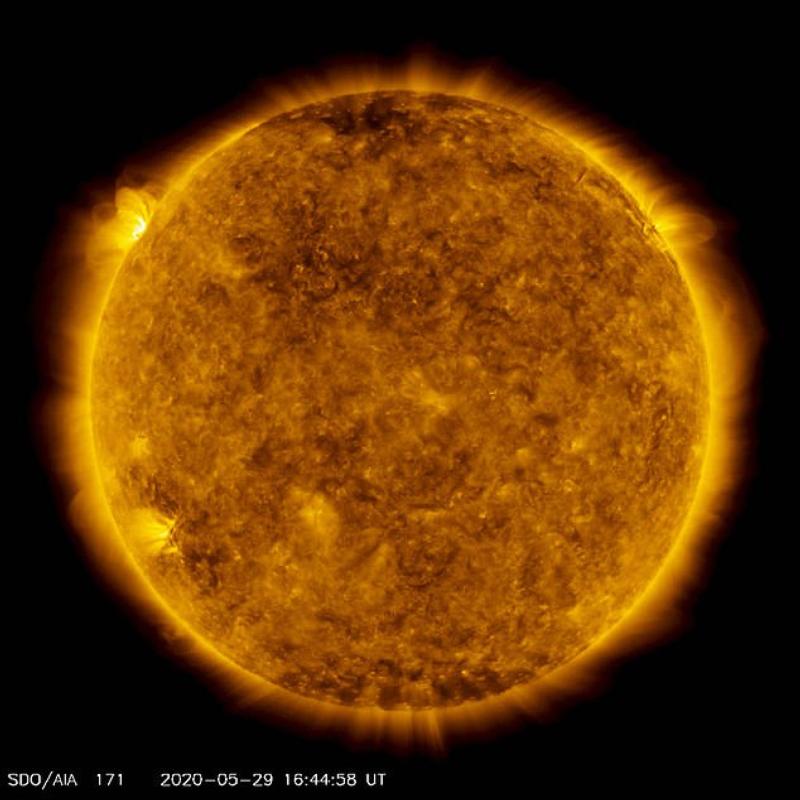 New sunspots on the surface of the Sun and the biggest solar flares since 2017 could be a sign that our star is waking up from a long slumber, according to NASA.

The NASA Solar Dynamics Observatory (SDO) spotted the 'strongest flare since October 2017' on May 29, suggesting it may be entering a new solar cycle.

A solar flare is a burst of radiation coming from sunspots - relatively cool patches on the surface of the Sun - and NASA says there's also an increase in sunspot activity.

The flare poses no danger to Earth as it wasn't aimed at our planet - but NASA says it is a sign of the star moving to a more active phase of its 11-year cycle.

The flares were too weak to pass the threshold at which the Space Weather Prediction Center would trigger an alert to scientists on Earth, NASA said.

After several months of very few sunspots and little solar activity, scientists and space weather forecasters are keeping their eye on this new cluster to see whether they grow or quickly disappear.

According to NASA 'the sunspots may well be harbingers of the Sun's solar cycle ramping up and becoming more active.'

Whether they are just a temporary change or a move to a new more active phase won't be known for a few months months, NASA said.

'It takes at least six months of solar observations and sunspot-counting after a minimum to know when it's occurred,' the space agency wrote on its website.

'Because that minimum is defined by the lowest number of sunspots in a cycle, scientists need to see the numbers consistently rising before they can determine when exactly they were at the bottom.'

It means that solar minimum is only recognisable after the fact - you can't say 'we're currently in solar minimum' as it takes up to 12 months to confirm - by which point we would be out of solar minimum.

During its 11-year cycle activity from the Sun rises and falls, sunspots also rise and fall in number - these sunspots are tracked by NASA and other agencies.

By tracking the sunspots they are able to determine and predict the progress of the solar cycle and solar activity coming towards the Earth.

'Currently, scientists are paying close attention to the sunspot number as it's key to determining the dates of solar minimum,' NASA wrote.

We are currently in Solar Cycle 24 but if we are going through solar minimum then we would be entering the start of Solar Cycle 25.

'This new sunspot activity could be a sign that the Sun is possibly revving up to the new cycle and has passed through minimum,' said NASA.

The natural variability of the Sun is one reason why we won't know the exact details for at least six months.

If numbers of sunspots go up or down in any one month, that doesn't mean it won't reverse course the next month.

Which is why scientists need long-term data to build a picture of the trends the Sun is currently going through to decide if it is entering the next cycle.

'Commonly, that means the number we use to compare any given month is the average sunspot number from six months both backward and forward in time.

The flares detected on May 29 were classed as M-class solar flares - coming from the new sunspots seen on the surface of the Sun.

Solar flares are given a classification of either A, B, C, M or X depending on just how powerful the radiation they emit is when it reaches the Earth.

An M-class flare is 'medium-sized' and if hitting the Earth directly can cause brief radio blackouts over the polar regions and minor radiation storms.

However, these flares were not pointed towards the Earth and pose no danger.

According to SpaceWeatherLive this is the first M-class flare from the Sun in 925 days and said it is 'very likely' this is the start of the next solar cycle.

The solar cycle is an average of 11 years - but it can last from nine to 14 years and it starts from a solar minimum - the least active point in a stars cycle.

The cycles have been measured since 1755 and this would be the 25th in the chain.

At peak, during solar maximum, the Sun produced more electrons and protons and lets off more intense solar flares.

'Interesting times and possibly a historic moment if this indeed is the first M-class event of the new Solar Cycle,' said SpaceWeatherLive.com.

Sun unleashes its biggest flare since 2017